The women listed here are ones who have made their way up the Hendon Mob and Global Poker Index rankings in 2015 and shown their dedication to the game of poker. There will be women who soar up the charts in 2016 without so much as a peep in this article, and I look forward to watching them shine. In the meantime, these are some of the women I predict will do great things in the coming year.

The Taiwanese poker pro has been making a name for herself on the tournament poker circuit since 2010, as that was when she began to take her winning ways in Macau on the road to places like Las Vegas and beyond.

In just the past year, Kuo made a WSOP final table, finishing fourth in the $1,500 NLHE Shootout for nearly $83K, and she won the ACOP NLHE Teams Championship in Macau with partner Jason Mo for more than HK$82K. She is currently ranked second in the GPI global ladies rankings.

The Arizona native made her big poker debut on the world stage at the 2015 WSOP when she made a deep run Main Event. She ended up finishing in 29th place for more than $211K and showed how to successfully mix poker and law careers.

Minkin’s first listed GPI score came in a local event, the 2013 Arizona State Poker Championship, where she finished second for nearly $152K. She continued to do well but really made her mark in 2015, starting with an LA Poker Classic title in January and a third place finish at the final table of the WPT Lucky Hearts Poker Open Main Event the following month for more than almost $263K. As long as she can make it on the road to tournaments, Minkin will remain a force.

When she left her law career and transitioned to full-time poker player, Hall took the poker world by storm. In her first year (2015), rumor has it she was quite successful in live cash games, not to mention very open on social media about her feminist leanings, which was refreshing to many women in the poker industry. By the end of the year, she had made two World Poker Tour final tables, one at WPT Maryland Live! in September with a fifth place finish to her credit, and the other at the WPT Five Diamond World Poker Classic in Las Vegas. That put her yearly tournament earnings close to $400K, and many predict that she is just getting started.

It was in 2012 that she began to take live poker seriously, and it soon developed into a lucrative career. She quickly racked up wins at various Florida live series and grabbed a WSOP Circuit ring. In 2013, she made a WSOP final table in the $1,500 PLO Hi/Lo event, another in a $1,500 NLHE event, and she grabbed her first WSOP bracelet in a different $1,500 NLHE tournament.

Harwood was back in prime poker form in 2015 with a win at the Big Stax Championship in Pennsylvania and then a massive victory at the WSOP National Championship for more than $341K. She has earned $1.6 million already, in just a few years. 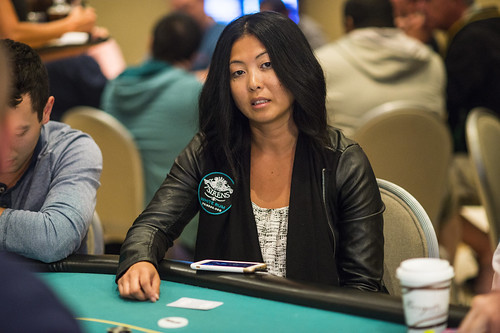 As a woman who has been in the poker world in some form for nearly a decade, she is well-versed in what it takes to be a successful live pro. She has numerous final tables to her credit, dating back to 2008. Though her primary focus in 2015 was being a parent, she still worked in plenty of cash and tournament poker.

Her 2015 started with a fifth place finish at the final table of the WPT Borgata Winter Open for more than $174K, and she final tabled the Hollywood Poker Open in Las Vegas during the summer as well for another $70K. Mostly, Taylor-Brady plays close to home on the east coast, and she tears it up when she does. Expect to see more of her in 2016.

There will be more female faces at the tables in 2016. It is likely inevitable that players like Vanessa Selbst, Liv Boeree, and Maria Ho will be there. It won’t be a surprise to see Jennifer Shahade, Jessica Dawley, and Natasha Barbour there as well. Nancy Birnbaum and Rachel Kranz, Xuan Liu and Danielle Andersen, too? Very likely. And as mentioned before, there are too many more to name.

Poker’s ups and downs make it difficult to predict which known players will return to the spotlight in 2016. With any luck and skill, all of them will.