Poker can no longer be considered an “American” game. While many of the “stars” of the early years of poker were American, the game is enjoyed by players all over the world and in recent years, many of the game’s top stars are coming from outside of the United States.

All you need to do is look at the number of Canadian poker stars that are presently dominating the game. Three Canadians sit in the top 20 on the All-Time Money List and the game’s most popular star hails from Toronto. Today we take a look at some of the top poker stars in Canada from both live and virtual felts.

You cannot have a list of top Canadian poker players without including Daniel Negreanu. The six-time WSOP bracelet winner and two-time WPT champion is #1 on the All-Time Money List with $30.86 million and counting. He was a first ballot Hall of Famer in 2014 and was also voted “Poker Ambassador of the Year” at the 2014 American Poker Awards.

Negreanu can do it all when it comes to poker. He is an accomplished cash game and tournament player and is one of the most popular poker personalities in the game. If you wanted to build a poker franchise, you’d pick Negreanu to anchor your organization.

As a member of Team PokerStars, Negreanu is helping to grow the game of poker worldwide. Most recently, he’s been using his star power to help influence iPoker regulation in California. As part of the PokerStars Pro Tour, he traveled to various card rooms in California promoting both PokerStars and online poker regulation.

Griffin Benger rose to stardom into two competitive arenas. As a teenager, Benger dominated the world of Counter-Strike as “shaGuar” before transitioning to the world of online poker. There he is best known as Flush_Entity, one of the most feared players in the online game.

Benger has amassed an impressive resume with $6.45 million in online tournament earnings. He has an impressive online resume that includes 164 wins and over 400 top three finishes.

Benger has also enjoyed success in the live arena with over $1.38 million in tournament earnings. His largest score came in 2013 when he took down the EPT Berlin High Roller Event, earning $562,343. Benger is likely best known by casual poker fans for his deep run in the 2014 WSOP Main Event. He finished 90th, earning $72,369.

Mike Leah is one of the most versatile poker players in the game, enjoying success in both the live and online arenas. Playing online as GoLeafsGoEh, he has over $2.75 million in tournament earnings along with six major online poker titles. He holds two WCOOP bracelets with the most recent coming at the 2015 WCOOP. Leah also has four FTOPS titles, tying him for first all-time with Yuval ‘yuvee04′ Bronshtein.

Over the last two years, Leah has enjoyed his two best years as a live tournament player. In 2014, Leah accomplished numerous milestones starting with a pair of WSOP Circuit ring victories in a 24-hour span at the Bicycle Casino stop.

Later that year, he scored his first seven-figure score after finishing 2nd in the Seminole Hard Rock Poker Open Main Event. He ended the year by winning his first WSOP bracelet, taking down the A$25,000 High Roller Event at the 2014 WSOP APAC. 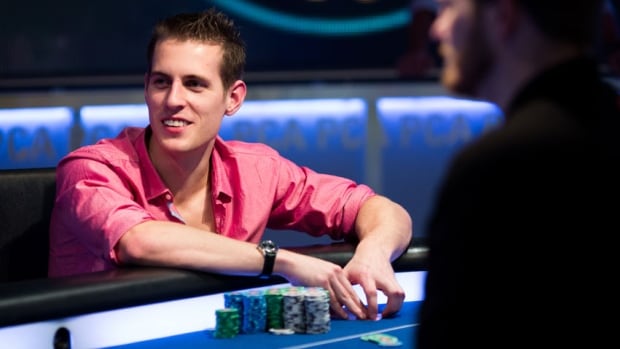 Mike McDonald started his poker career playing online poker but later transitioned to become a live poker superstar. Playing online as Timex, he’s earned over $2.92 million in online poker tournaments with over 50 online victories. His best online score came during the 2004 FTOPS Main Event where he finished 3rd for $200,000. Earlier this year, he finished fifth in the WCOOP $51,000 8-Max Super High Roller for $172,500.

Timex broke through in the live arena in 2008 by becoming the youngest EPT Champion in history after taking down the EPT Dortmund. The 18-year-old earned $1.37 million for his breakout performance. He also finished 5th in the same event a year later.

Over the year’s, McDonald has posted numerous deep runs in high profile events and multiple six-figure scores. 2014 was a career year for Timex after earning over $4 million in live tournament earnings. He finished 2nd in the PCA Main Event, 2nd in the A$100k Challenge at Aussie Millions and 3rd in the A$250k Challenge, later won by Phil Ivey.

Earlier this year, McDonald again made the final table of the A$250,000. This time he finished runner-up for $1.2 million. Most recently, McDonald took down the €25,750 8-Handed High Roller at the EPT Malta for over $561,000. Over the last two years, McDonald has earned $6.81 million in live tournaments and has $12.5 million in lifetime earnings.

Toronto’s Sorel Mizzi is an accomplished player both live and online. He is 4th on Canada’s All-Time Money List with $11.13 million in live tournament earnings. His largest live score came at the 2013 GuangDong Asia Millions Main Event where he finished runner-up for $2.07 million. In early 2014, he finished runner-up in the Aussie Millions Main Event, taking home over $874,000.

Mizzi is still seeking his first major live poker title but has come close on multiple occasions. He finished runner-up in the £5,000 PLO at the 2008 WSOP Europe and also finished second in the $5,000 PLO at the 2009 World Series of Poker. Earlier this year, he made his first WPT final table at Bay 101 Shooting Stars, eventually finishing 4th for $310,060.

Mizzi is known online at PokerStars as zangbezan24 and on Full Tilt as Imper1um. Overall, he has earned over $3.62 million playing online poker tournaments. His largest score came back in may when he took down SCOOP Event #3-H, $2,100 NL with a $1 Million Guarantee. This earned him $354,960. Mizzi finished 2nd in the same event in 2014, earning over $278k.

In addition to his SCOOP title, Mizzi has two FTOPS titles and finished atop the FTOPS XX leaderboard in 2011 after cashing in 17 out of 45 events.

Jonathan Duhamel is #2 on Canada’s All-Time Money List and #10 on the Global All-Time List. He has $17.57 million in tournament earnings and while the majority of those earnings came from two events, both were epic scores.

Duhamel is most well-known for being the first player to go wire-to-wire at the November Nine final table as chip leader to win the title. He won the 2008 WSOP Main Event earning over $8.94 million.

After winning the 2008 Main Event, Duhamel proved that he was no fluke and has posted solid deep runs throughout the years. He won the 2011 EPT Deauville High Roller, finished second in the 2012 PCA Super High Roller Event and made the final table of the 2013 WSOP Poker Player’s Championship. In 2014, he made three final tables at the WSOP APAC.

Despite his impressive runs, nothing quite compared to his 2008 Main Event victory. That was until earlier this year. Duhamel went on a remarkable run during the $111,111 ONE DROP High Roller and took down the event to earn $3.98 million. This was his first seven-figure score since 2008 and second career bracelet.

Last month, Duhamel continued to amaze at the 2015 WSOP Europe. After finishing 4th in the €2,200 Mixed Event, he made the final table of the €25,600 High Roller. Duhamel steamrolled his way to his third career bracelet victory and $628,915 in prize money.

Jonathan Duhamel has career earnings of $17.57 million. He is one of the few Main Event champions in recent years to go on to enjoy significant success after winning the most coveted prize in poker. Sikorski has won the PokerStars Super Tuesday event three times in his career and also has one FTOPS title. So far, p0cket00 has 180 online tournament victories and over 500 top three finishes. Few players in the world have won more in online tournaments than Sikorski. The UK’s Chris “moorman1” Moorman is online poker’s all-time money earner with over $12.7 million in tournament earnings.