Is There a Dress Code at the Poker Table?

One of the longstanding debates in poker is whether or not poker should enforce a dress code. This mostly comes into play in tournaments, most notably at final tables that are televised or broadcast to the public in some manner.

The discussion rears its head most often when a player dresses particularly badly in such a situation, though it also happens when a person out-dresses all other opponents by wearing a suit or dress. The issue has also come into play with regard to sunglasses and hoodies – items that disguise the player’s appearance to the point that it annoys others.

There are no dress codes in poker, for the most part. Most casinos, especially in the United States, have no rules regarding a customer’s attire. The TDA (Tournament Directors Association) and FiDPA (Federation Internationale de Poker Association) don’t touch the subject, nor do poker tours like the World Poker Tour or European Poker Tour.

Some casinos in Europe do require adherence to a dress code to enter their establishments. For example, Casino Barcelona notes that no jacket or tie is required, but “proper casual” is the rule, putting the decisions at the discretion of the monitors of the casino doors. Most players will be turned away if wearing sandals, beach clothes, or sportswear. Dusk Till Dawn in the UK requires “appropriate” dress, which again is at the discretion of the casino workers. Tracksuits and shorts are specifically prohibited.

So Why Bring It Up?

The topic most recently rose again when this year’s World Series of Poker Main Event final table aired on ESPN. Let’s recall the introduction of the players:

Zvi Stern walked to the stage with dark jeans and a hoodie.

Josh Beckley wore a classy sweater and scarf with jeans.

Federico Butteroni showed off a black suit over a white button-down shirt and blue tie. 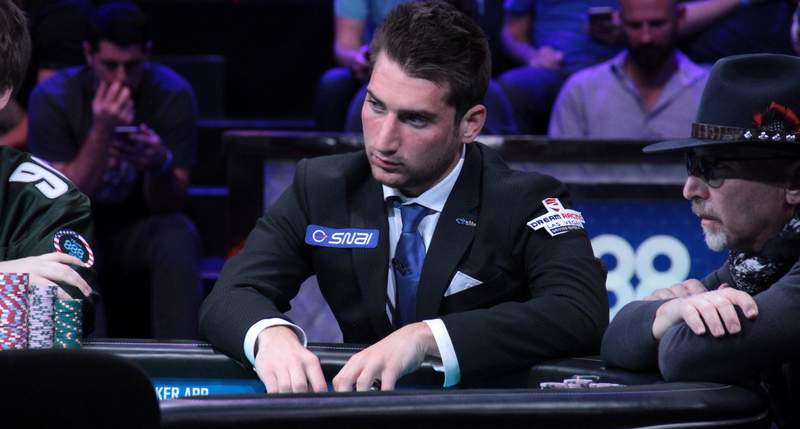 The standout in the field was the chip leader, not for his dominance at the table but for his appearance. Though he was escorted to the stage by Las Vegas showgirls and was set to play poker in front of an international audience, broadcast by ESPN to locations around the world, at the biggest final table of the year, McKeehen seemed as if he crawled out of bed just in time to make it there.

Off the record, some of the players at the final table were insulted by his appearance. They thought his choice not to shave or even wear a pair of jeans and clean shoes was disrespectful.

Of course, it was McKeehen’s choice. There are no rules regarding attire at the WSOP final table, which means it was his prerogative to dress as he wished. And he likely didn’t give one tiny shit about what others thought of his choice of clothing or facial hair. He ended up winning $7.68 million, so his game was clearly on point.

Back to the Question

Should there be a dress code for televised final tables in poker?

Each tour and organization must make their own rules, and none have chosen to implement a dress code thus far. WPT commentator Mike Sexton has long felt that a dress code should be imposed as other sports often do. He wrote about his viewpoint for PartyPoker in 2012 and has continually reiterated his opinion as necessary through the years.

Ultimately, it will come down to public demand. Many poker players have started to step up the poker attire game on their own, realizing that dressing with class for a final table not only improves their own image in some fans’ eyes but shows their respect for the game.

The Basics of Poker Attire

What a player wears at the table does convey an image. Of course, most players don’t want to dress uncomfortably for a tournament in which they have to sit for 10 or 12 hours and sprint to the bathroom on breaks. However, there are some guidelines that players may want to consider.

Hello, 2006 poker players! The gimmick still works in some cases, and some players do it well. In most cases, however, the full cover-up of all “tell zones” is an indication that you have tells and are afraid to show them.

For the love of social norms, please leave the house slippers in your room. So many types of shoes are available, many that don’t even require the tying of laces or worrying about blisters. And when you make it to that final table and have to wear tennis shoes, at least make sure they resemble their original color.

Also, keep the shoes on your feet at the table. Reports of players who remove their shoes to reveal smelly feet or even – gulp – to clip toe nails – are just nasty. Remember when Antonio Esfandiari won the WSOP Big One for One Drop for $18 million in bare feet and put those feet on the poker table? Some of us sure do.

Ladies, those high heels look fabulous. If your feet can handle those shoes for all those hours at the table, you go ahead and work it. Just consider if it’s worth it before putting your feet through hell.

For anyone choosing flip-flops or open-toed shoes of any kind, please make sure your feet are clean and nails are clipped. Please!

Ladies, I get that it works sometimes. Wearing low-cut tops can be a strategic move, and it may work on some players. It may distract players from your sly strategy or your tells, but it also sets an image that stays with you. The revealing clothing option is not always necessary to work your magic.

Of course you want to show off that WSOP bracelet, but do you want to immediately let everyone know that you’re a potentially skilled player? Obviously, those of us who don’t have one are mostly jealous, so take our eye rolls at your bracelet with a grain of salt.

Wedding rings mean something. The fact that a person is wearing one means that he or she is married and proud enough of it to wear that ring. This means that flirtation is off limits. Respect that.

If you want to dress up for the first day of a marathon tournament, go for it! It sends a message that you are excited to be there, you prepared for the event, and you treat the entire game or tournament with the utmost respect. Keep in mind, however, that it is a marathon instead of a sprint, and starting with the bar so high can become tiresome after several days. And as mentioned already, remember that the breaks are short, bathrooms are sometimes far, and hours can go by slowly.

Those who have set a high standard for dressing up at the tables, we have seen you. Marcel Luske was one of the more prominent players during the poker boom to make a statement with a suit at the poker table. Olivier Busquet, Tony Dunst, and Max Steinberg, we notice your spiffy suits, too.

Players can take the suit idea too far, though. Take it from PokerUpdate’s own Robbie Strazynski:

Top honors at the WSOP November Nine final table this year went to Max Steinberg and Federico Butteroni for their serious fashion statements. And to Steinberg’s friends and family, all of whom dressed in formalwear to attend the final table at the Penn & Teller Theater, you stood out as well.

The bottom line is that your fashion choices at the tables should be comfortable and practical, but they also set an image for you. Poker players are (or should be) observant, and they notice everything from the dirt under your fingernails to your unzipped fly.

Pay attention. Your opponents certainly will.

[fbcomments]
How Much Do Professional Poker Players Make Playing Poker? It Is Time for a Poker World Championship Event